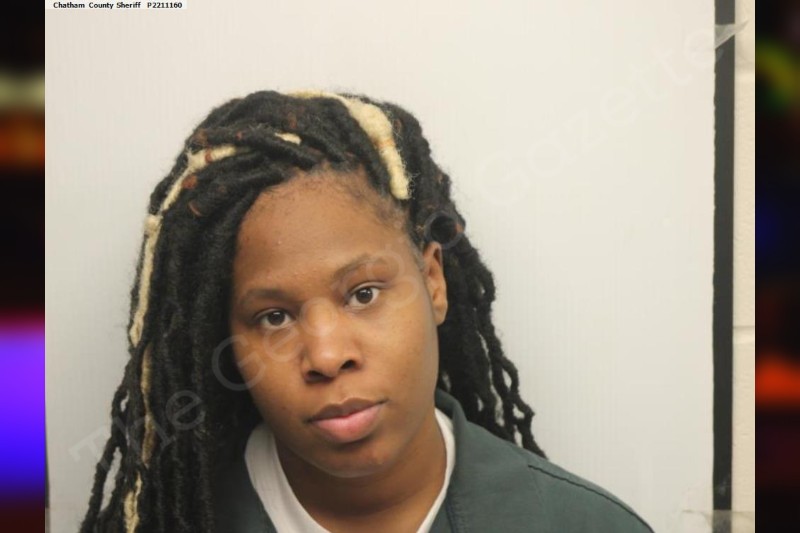 Upon arrival, I was flagged down by a female, later identified as Gernarda Ward, who was standing in the driveway. As I approached the house, she made way to the front porch, when a male, identified as [VICTIM #1], exited the residence and began shouting that Gernarda needed to leave. I told [VICTIM #1] to come speak with me and as he began to walk down the steps, I observed Gernarda lift her foot up, seemingly in attempt to trip him down the stairs.

When I spoke with [VICTIM #1], he advised me that Gernarda showed up at his house this morning with their one month infant child, and began an argument. He further stated that she brandished a knife towards him and made threats on his life. From the porch, Gernarda pulled out what I observed to be a serrated kitchen knife, from the front right, inside pocket, of her jacket. She then placed it away.

While speaking with [VICTIM #1] to further hear what he had to say, Gernarda walked down the steps and began leaning on the back of [VICTIM #1]’s car, persistently kicking at it with her heel. The two continued to argue as I tried to calm them both down. The two then got within reaching distance of one another and each put their hands up. I carefully observed that Gernarda was not going for her knife, and was able to keep them separated.

I advised [VICTIM #1] to go wait on the porch, while I walked Gernarda to the end of the driveway to hear her side of the story. Gernarda advised me that she accused [VICTIM #1] of cheating on him and that she should go on birth control. She stated that she took a Lyft to his residence this morning, along with their child. She told me that she brought the knives with her because she was “looking for a fight.” She then handed me a serrated kitchen knife with a black handle, and a closed black and yellow utility knife.

I then asked [VICTIM #1] to explain exactly what brought Gernarda over and why she had the knives. He advised that earlier in the morning, he accused her of cheating and told her that she should go on birth control. [VICTIM #1] stated that around 0830 hours, she showed up on his doorstep with the child. He told her to both come in and get out of the cold. Once inside they continued to argue. He stated that he observed what looked like a weapon in her pocket.

He stated that while inside, Gernarda continued to stare him down, making him uncomfortable. He stated they went outside in front yard and the argument escalated. The infant remained inside. He advised that he went to grab her pocket and see if she did in fact have a weapon but when he did this, she brandished a “knife with a black handle.” [VICTIM #1] further advised that Gernarda said “I’ll kill you nig*a.” At this point [VICTIM #1] called the police, he stated that he did not want to get physical with her.

[VICTIM #1] did admit to raising his voice at her during the argument due to emotion. [VICTIM #1] further advised that he was in another altercation with Gernarda’s sister in Savannah, approximately a month ago, where a firearm was drawn on him (Savannah PD CRN 221017010). [VICTIM #1] advised that he no longer wanted Gernarda on his property, and that he wanted to press charges for her brandishing a knife at him, and making threats on his life. [VICTIM #1] also stated he was in the process of trying to legitimize the child as actually his, as there is uncertainty at this point.

At this time, [VICTIM #1] advised me that there is a security camera at the front of his residence. He spent some time trying to pull up the footage, but was unsuccessful. I advised him to try and obtain that footage, and call to have it added to the report. I then placed Gernarda into handcuffs which were sized to fit, and double locked. She was then placed into the back of my patrol vehicle, which was checked before and after. I advised her what the current charges were, and that she was being issued a criminal trespass notice for this location.

I then read Gernarda Miranda Rights, and she advised me that she understood. She again stated that she intentionally brought the knives and was looking for a fight. I allowed her to use her phone to arrange for someone to come pick her child up. A short time later, her father [REDACTED] and step-mother [REDACTED], arrived on scene to pick up the child. I walked [REDACTED] to the house where she was recognized by [VICTIM #1], who then handed the child off to her.

Sgt. Ramirez contacted Judge Tomlinson, and advised him of the situation. Judge Tomlinson advised for a $2,500.00 bond and that there be specific bond conditions set, along with the a court date of 12/07/2022. I explained this to Gernarda, who advised me that she understood the conditions of her bond. Gernarda was then transported to Chatham County Detention Center, where she was processed and released into their custody.

Victim notice paperwork was filled out. [VICTIM #1] was given a victim’s pamphlet, along with a case number and information on how to obtain a copy of this report. The Division of Family and Child Services was notified of the incident, Operator [REDACTED] Ext. #3028.