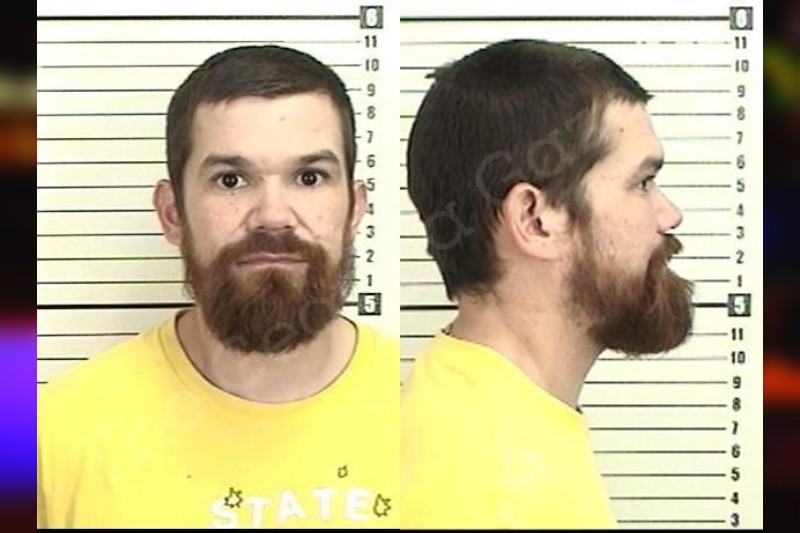 On October 14, 2022 at approximately 12:30PM I, Cpl. Corey Hoster (SMPD 129), was dispatched to the area of [200 BLOCK] Westgate Circle in Saint Marys, Georgia 31558 (Camden County) in reference to a possible physical domestic disturbance. The caller, identified as Ms. [WITNESS #1], stated that her husband helped to separate both parties before the male half ran down the street towards Plantation Village Drive away from the residence. The male subject was described as a white male wearing shorts, a yellow t shirt, and a hat. The caller also stated that the female half appeared to be injured but declined EMS attention.

I responded in unit 719 with my emergency lights and siren activated in a code three response. I was driving up the area of Charlie Smith Sr Hwy (Spur 40) and Winding Road when I observed a male walking shirtless on the sidewalk towards the Dollar General store. The male fit the description of his other clothing and was holding in his hands a yellow shirt. I immediately braked my patrol unit and rapidly entered the parking lot of the Dollar General to intercept the male subject. I called out to him and at first, he did not appear to acknowledge my presence but on my second attempt he said hello. I instructed him to walk over to my patrol car and he obliged.

I patted the male subject down for any weapons due to the nature of the call for service and from my pat down did not feel any weaponry on his person. I identified the male as Mr. Matthew Fiedler and I asked him what happened today. Mr. Fiedler was visibly sweating, had the odor of alcoholic beverage consumption coming from his breath and person. Mr. Fiedler stated that he had gotten into an argument with his one-time girlfriend, Ms. [VICTIM #1], and that both of them had been drinking “way too much.” Ofc. Shaw (SMPD 127) contacted Ms. [VICTIM #1] at [200 BLOCK] Westgate Circle, and I placed Mr. Fiedler into investigative detention before transporting him to Ofc. Shaw’s location.

I then switched places with Ofc. Shaw so that I could speak to Ms. [VICTIM #1] in the residence. Ms. [VICTIM #1] had obvious blood marks on her yellow shirt as well as an injured right middle finger, a laceration to her left thigh, scraped knees, a visibly bruised and scraped right elbow, and a scrape on her right shin. I asked Ms. [VICTIM #1] what happened and she stated that Mr. Fiedler used to be in a relationship with her years ago. Mr. Fiedler had moved back to Camden County recently and she arranged for Mr. Fiedler to live with her father across town.

While on scene I did not observe or perceive any evidence of Ms. [VICTIM #1] drinking alcohol. Ms. [VICTIM #1] stated that during the events Mr. Fiedler had torn an amount of her clothing and showed me torn clothing in the trash can. Based off of the totality of the circumstances, the statements from Mr. [WITNESS #2], and the physical evidence on Ms. [VICTIM #1]. I placed Mr. Fiedler under arrest for Aggravated Assault, Battery, and Cruelty to Children in the Third Degree. While driving to the Camden County Jail for incarceration Mr. Fiedler spontaneously stated that approximately ten years ago he was arrested in Florida for strangling Ms. [VICTIM #1].

I transported Mr. Fiedler to the Camden County Jail without further incident. I am seeking warrants on Matthew Fiedler for Aggravated Assault for strangling Ms. [VICTIM #1] with her shorts, Battery for pushing her to the ground and “manhandling” her, and for Cruelty to Children in the Third Degree for doing all of this in the presence of [REDACTED BY AGENCY], Ms. [VICTIM #1]’s two year old daughter. Mr. Fiedler and Ms. [VICTIM #1]’s relationship did not meet any of the conditions for Family Violence nor did they have any children in common to my knowledge at the time of the call and charging.