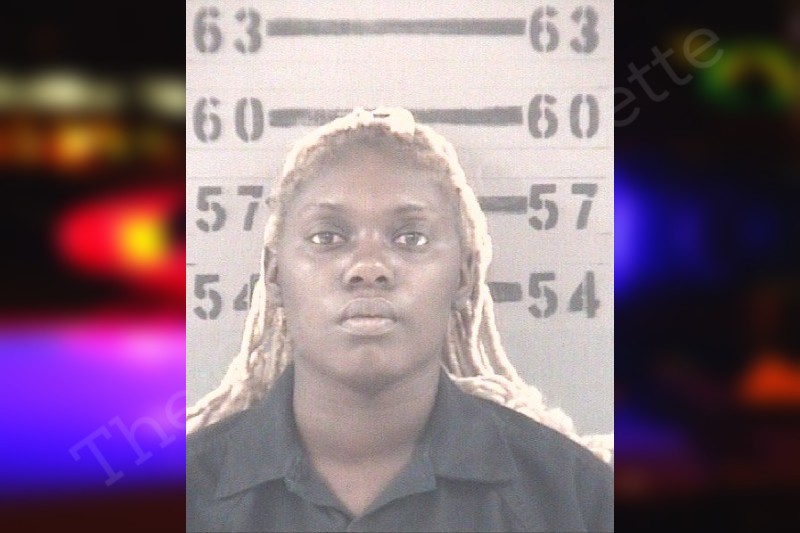 Warning: The following story contains information regarding violence against children.

Dougherty County (August 23, 2022) – An Albany mother was arrested on child cruelty charges for allegedly throwing her seven month old baby onto the ground in a parking lot and walking away during an alcohol-fueled argument with her boyfriend.

Police responded to Superior Creek Lodge after receiving a call from a male who wanted to report that his girlfriend, Tanada Terry, had injured their child during a verbal argument. When the police arrived, they met with both parties. Terry was upset and crying and threw herself onto the ground.

Terry stated that she and her boyfriend had broken up the day before and were arguing. She was leaving with the child, and as she crossed the parking lot, she accidentally dropped her. Terry claims her boyfriend pushed her and threatened to shoot and kill her. She said she was injured during the push and had a scratch on her right shoulder. Terry stated that she has a mental health diagnosis.

After speaking with Terry’s boyfriend, he told the police they had been arguing, and Terry was drunk. He was standing in his doorway while she crossed the parking lot to leave. He saw Terry throw his daughter to the ground and continue walking.

He ran at Terry as fast as he could, pushed her away, and picked up the child. He immediately called 911.

A neighbor on a nearby balcony was a witness to the event. She told police that she was outside and heard the pair arguing. She heard Terry yell, “I wish your kid were dead.” She witnessed her walking across the parking lot with the baby on her hip, dropping her, and continuing walking. She stated that the father came running, pushed her, and picked up the baby.

EMS was called to the scene to evaluate the child. The child suffered a swollen lump on the left side of her forehead and a cut to the top of her left middle finger. The child did not need to be transported for treatment.

Due to the physical injuries sustained by the child and the testimonial evidence, Terry was arrested and charged with cruelty to children causing excessive physical or mental pain. She was transported to Dougherty County jail. The case is currently pending in court.

Tanada was placed in double locked handcuffs behind her back and searched incident to arrest with negative results. Tanada was placed in the back seat of my patrol vehicle and transported to Dougherty County Jail per Investigator Gulley’s request. Tanada was released into the custody of jail staff. We conducted a search of the back seat of my vehicle for contraband prior to leaving the sally port area of the jail, with negative results. My patrol vehicle was searched prior to my start of duty at approximately 1900 hours on 08/22/2022.

Cpl. Koizumi’s department issued body camera was on and recording during our time on scene. This case is labeled as Cruelty to Children. This case has been forwarded to Investigations.