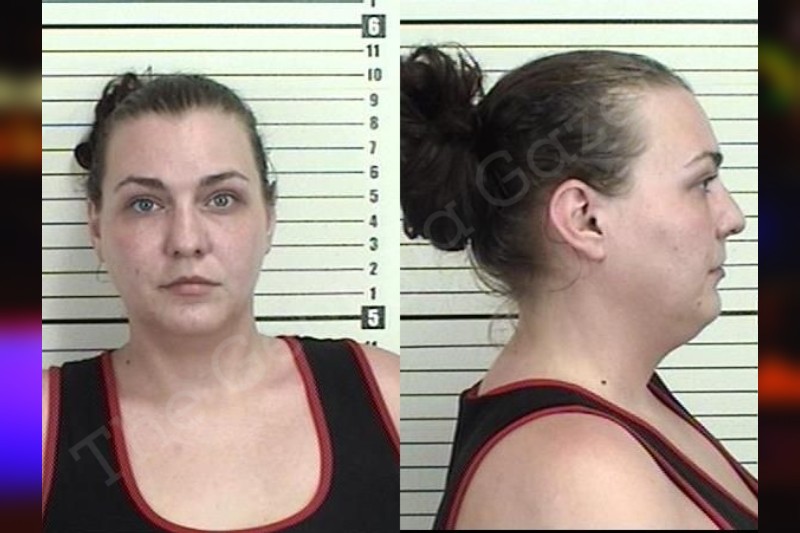 Camden County (July 23, 2022) – Police responded to a Georgia welcome center in St. Mary’s after two witnesses observed a woman, identified as Serena Stills, violently kicking, hitting, and dragging a dog she was walking on a leash.

Upon arriving at the welcome center, officers met with the witnesses in the parking lot. One of the witnesses was visibly emotional and upset and had taken several videos of the woman beating a black dog, which appeared to be a lab pit-bull mixed breed.

Officers watched the videos and observed that Stills seemed very frustrated, evidenced in her body language and actions, which were described as “tense, irritable, and impatient.” In the video, the dog was seen being walked by Stills on a leash and seemed to be behaving. The dog was not acting aggressively, pulling on the leash, or horseplaying. Although the dog was not misbehaving, Stills repeatedly hit and yanked the dog around by the leash.

One of the officers described the videos of the abuse as very disturbing and hard to watch. Stills’ behavior was very inappropriate and violent towards the animal, who would crouch down and submit to her after the blows. The dog appeared very confused and would look around in response to the abuse as if unsure of what to do. The violence towards the dog was unprovoked and unjustified.

The witness documenting the incident was distraught and concerned, as Stills had been walking the dog with a juvenile who had also witnessed the violent abuse Stills inflicted on the animal.

The witness noted that Stills had also beaten the dog with her shoe after it came off while kicking the animal. At one point, the dog stopped to sniff something, and Stills held the dog down and proceeded to hit the dog with her shoe. The witness stated that at one point, the dog’s tongue was hanging out of its mouth as Stills yanked it up and suspended the animal in the air by its collar before being thrown back to the ground.

The second witness happened to be a medical doctor. While not a veterinarian, he believed that the dog needed medical attention after the abuse because of the severity of the blows and abuse sustained. The witness was concerned that the animal may have obtained internal injuries from the attack.

The officer who viewed the videos and took the witness statements conversed with his fellow officers, and Stills was then taken into custody.

After the arrest, police spoke with Stills’ mother, who they learned was the actual owner of the dog, Black Jack, or BJ for short. Mrs. Stills had stopped at the welcome center to use the restroom, and her daughter was supposed to walk the dog. Mrs. Stills was utterly oblivious to the abuse that had taken place, for when she emerged from the restroom, her daughter was detained, and the police were on the scene. When Mrs. Stills learned of the incident, she informed officers that her daughter had bipolar disorder and had not been taking her medication. She stated that her daughter had a very bad temper and could become very irritable when not properly medicated. She said that she never knew her daughter ever to harm the dog, as she always loved animals.

Animal control was called to see if BJ would need to be taken into their custody because of the injuries sustained by him. BJ was evaluated but was an aggressive dog, and officers did not want to risk their own safety; however, it did seem as though BJ had a slight limp, and was favoring his right side as he walked, which was consistent with the areas in which he had been hit.

Due to the dog’s aggressiveness, Mrs. Stills was permitted to keep the dog in her custody under the strict agreement that BJ would be seen by a vet as soon as possible. Mrs. Stills agreed and was not suspected of any type of abuse towards the animal.

Serena Stills was arrested and charged with cruelty to animals for her attack on BJ, and she was transported to the Camden County Public Safety Complex.

On Saturday, July 23, 2022, at approximately 6:05PM, officers of the St. Marys Police Department were dispatched to 100 St. Marys Road, St. Marys, GA 31558 (Camden County; GA Welcome Center) in reference to a woman abusing a dog. The dispatcher stated a witness was on scene and reported a woman was kicking, hitting, and dragging a black dog. The dispatcher stated the suspect would be found in a bright blue Toyota Rav4 in the parking lot.

Corporal Stokes and I responded with the normal flow of traffic. Upon arrival, Corporal Stokes met with Ms. Serena Stills (suspect) at the blue Toyota Rav4 which was bearing the NC registration [REDACTED BY AGENCY].

As I proceeded to watch the videos, I observed Serena appeared to be very frustrated. Serena’s frustration was evident in her body language and actions which were tense, irritable, and impatient. I observed, on the video, Serena walking a large black lab/pitt-bull mixed breed dog. The dog was on a leash and seemed to be behaving. The dog was not pulling on the leash, acting aggressively, or horseplaying. Although the dog was not misbehaving, Serena began hitting the dog repeatedly and yanked the dog around by it’s harness/collar. The violent behavior against the dog was so abrupt that it was very shocking and difficult to watch on the video. Serena’s behavior with the animal was very inappropriate and violent.

In response to her aggression, I observed the dog would submit and cower to her. The dog appeared confused in response to the physical abuse. After being struck, the dog appeared to look around for a moment as if unsure what he should do. The violence committed against the dog was unprovoked and was not justified.

Ms. [WITNESS #1]’s video was shaky at times and it appeared that she was nervous and emotional while trying to capture the video footage and could not steady her hand very well. When Ms. [WITNESS #1] tried to speak to me about what she witnessed, she would continue crying because it was deeply troubling to her. Ms. [WITNESS #1] was upset because Serena was walking the dog with a juvenile at the time and she was also concerned for the juvenile being witness to that type of violence behavior upon on an animal. Ms. [WITNESS #1] told me after hitting the dog, Serena began kicking the dog. Ms. [WITNESS #1] could hardly speak when describing how difficult it was to witness the abuse.

After speaking with Ms. [WITNESS #1] and Mr. [WITNESS #2], I drove across the parking lot to Corporal Stokes’ location to make contact with him and advise him about what I learned from the [WITNESSES]. Shortly thereafter, Corporal Hoster and Officer Bishop arrived on scene to assist as well. After sharing the information with the officers about what transpired between Serena and the dog, Serena was taken into custody. Serena was arrested and secured in Officer Bishop’s patrol vehicle.

I then spoke with Ms. [WITNESS #3]. [WITNESS #3] was Serena’s mother and the actual legal owner of the dog who was abused in this incident. The abused dog was identified as a black lab/pit-bull mixed breed named Black Jack or BJ. BJ was said to be about four years old. [WITNESS #3] stated she went into the GA Welcome Center to use the restroom and while she was inside her daughter was going to walk the dogs. When [WITNESS #3] exited the restrooms, she exited to find police on scene and was oblivious to the abuse the occurred in her absence.

Animal Control was called on scene for the possibility of taking BJ into custody if necessary for the possible injuries. I tried to meet with BJ to evaluate him for his wellness, but BJ was an aggressive dog and I was not willing to risk my own safety. However, from my observations at a distance, I noticed BJ was favoring his right side when he walked. BJ appeared to have a limp and from the videos I observed, I did see him hit in that area several times.

Due to his aggressive nature, Animal Control permitted [WITNESS #3] to retain BJ in her custody under the agreement he be brought before a veterinarian immediately. [WITNESS #3] was not suspected of any abuse against her dog and agreed to bring BJ to a veterinarian to comply. [WITNESS #3] appeared appropriate during the situation and capable of rendering care to the animal as necessary.

Serena was arrested and charged with cruelty to animals for her actions against BJ. Serena was transported to the Camden County Public Safety Complex in Woodbine, GA for booking by Officer Bishop and Corporal Hoster where she was released to the jail staff for booking. On Monday, July 25, 2022, I secured the arrest warrant for Serena (22-2056MW OCGA § 16-12-4(b) Cruelty to Animals).