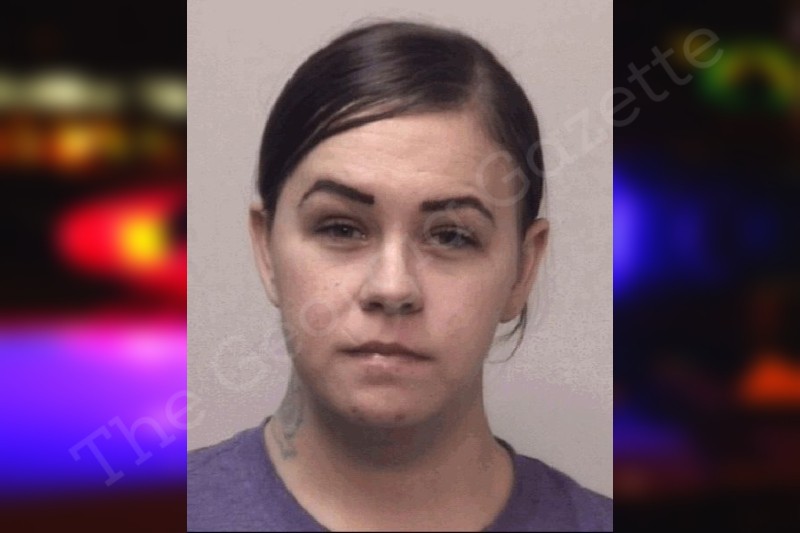 CRIMINAL DAMAGE TO PROPERTY IN THE SECOND DEGREE

While driving to the scene, 911 advised the suspect, Elanor Bishop, was leaving the scene and possibly heading home. Bishop was said to be driving a black Nissan Sentra. I started driving down Roscoe Rd and took Brimer Rd towards Tommy Lee Cook Rd. While on Brimer Rd, I made contact with a black Nissan Sentra (GA – [REDACTED]). I saw the car on the side of the road at Murphy Well on Brimer Rd. I activated my emergency equipment and got out with the vehicle.

A GCIC return of the tag came back to Elanor Bishop. I made contact with the driver. Bishop was in the driver seat, her mother was in the front passenger seat, and her one-year-old daughter was in the backseat. I asked Bishop out the car. I asked Bishop about Price Rd and she advised her baby’s father, [REDACTED BY AGENCY], was at her house for thanksgiving earlier this evening. Bishop stated [REDACTED BY AGENCY] stole her iPad and some other things and she went to his house to get the items back.

Sgt Mills asked her if she was willing to do some tests to determine if she was good to drive. Bishop agreed to do fields and stated, “even a sober person would have trouble doing this”. I medically cleared Bishop before each set of tests by asking if she had any prior brain injuries, wore contacts/glasses, concussions, or TBI’s. I cleared her for the W&T, and OLS by asking her if she had any back, hip, knee, leg, or feet injuries that would stop or hinder her ability to walk, stop, stand, balance, or turn.

During SFST I observed the following 6/6 horizontal gaze nystagmus clues: lack of smooth pursuit, distinct and sustained nystagmus, onset prior to 45 and vertical nystagmus. During walk and turn I observed the following 7/8 clues: cannot balance during instructions, started too soon, stopped while walking, missed heel-to-toe (was between 1 to 2 inches between from heel to toe), stepped off line, used arms to balance, and an improper turn. During one leg stand I observed the following 4/4 clues: swaying, hopping, using arm to balance, and putting foot down. Bishop put her foot down every other second to maintain balance while counting allowed. Sgt Mills had Bishop blow in a PBT and she blew a .104. Bishop also admitted to smoking marijuana earlier in the evening.

I placed Bishop in double locked handcuffs to the rear. I placed her in the backseat of my patrol vehicle. I read Bishop Georgia Implied Consent over the age of 21. Bishop refused a state administered test of her breath.

The vehicle was turned over to Bishop’s sister, [WITNESS #1]. [WITNESS #1] stated she knew Bishop was intoxicated because she was at the house for thanksgiving dinner earlier that evening. She stated Bishop drank two bottles of wine and had still been drinking when she left around 1900 hours. [WITNESS #1] stated she left to get their mother because Bishop passed out and she did not want her niece, Bishop’s one-year-old daughter, in the house without a sober adult.

I spoke with D/S Wheat who advised the victims had video evidence. [REDACTED BY AGENCY] told Wheat he was at the house for thanksgiving earlier with Bishop but she had been drinking so he left before she got violent. [REDACTED BY AGENCY] advised Bishop drank a six-pack of beer and two bottles of wine. Wheat advised Bishop could be seen breaking an antenna off a vehicle, slashing tires, breaking the gas cap off a car, hitting the cars with an umbrella causing a dent to the right quarter panel of his Chevy Cavalier.

[REDACTED BY AGENCY] advised the damages to his vehicle would are as follows:

He was unsure the amount to fix the antenna that was broken off. [VICTIM #1] advised it would cost $65 for her tire to get replaced.

Wheat advised [REDACTED BY AGENCY] and [VICTIM #1] of TPO procedures. The video was emailed to Sgt Mills and was uploaded to evidence.com. D/S Wheat had the victims fill out an official statement form.

Bishop was transported to Coweta County Jail and was turned over to jail staff without further incident. While at the jail, I attempted to obtain a Blood Search warrant but was unable to due to technical difficulties. ALS form was completed.