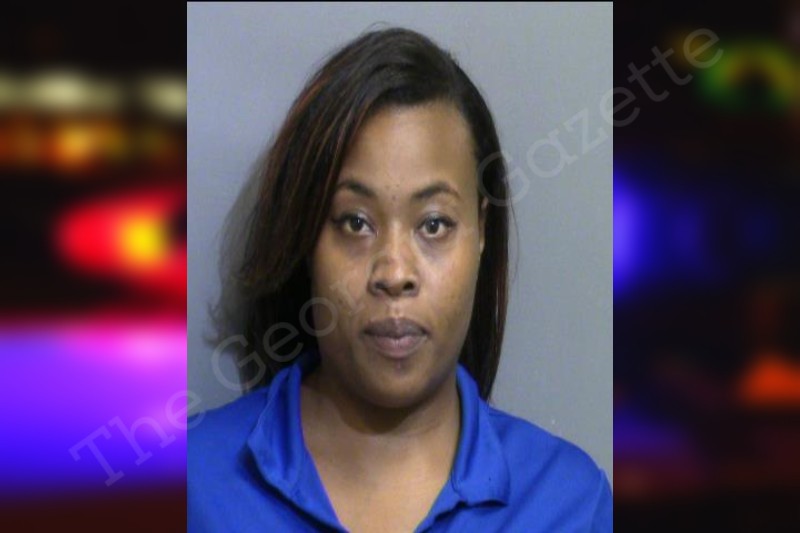 Glynn County (October 6, 2022) – Around 11:00 AM, a Glynn County officer was called to the scene at a back gate at Glyndale Elementary School, located behind the Eagle’s Point apartment complex, after a small child was found.

The officer met with the school resource officer, Terry Grantham, who was the one that found the child. The toddler said he had been home by himself with his dog. By questioning an older sibling, that attended the school, Grantham learned that the toddler lived in the Eagle’s Point apartments. The two officers left the child with a teacher, at the school, while they headed to the complex,

The location where the child lives is reported to be at least 100 yards away, with dangerous traffic and drowning hazards in between the two properties.

Upon arriving at the address given, the Glynn County officer knocked on the door several times, with no answer. He checked the door and found it to be unlocked. The officer walked in and announced his presence but found the apartment empty, with the exception of a black and white pit mixed dog. The apartment also reeked of the smell of marijuana.

A next-door neighbor came out and told the officers that she had just spoken to the mother and resident of the apartment, Porche Sanford, on the phone. Sanford told the neighbor that she was on her way back home. The neighbor told officers that it was a regular occurrence for Sanford’s kids to be wandering around unsupervised, and she was often asked to check in on the children while Sanford was not home.

The officers then met with the assistant property manager of the apartment complex, who told them that it was typical to find Sanford’s children running around and playing unsupervised. The manager told the officers that she had given at least one written warning to Sanford for leaving her children unattended on November 4, 2021.

Around 11:30 AM, Sanford finally arrived back home. She told the officers she had left her son with her brother, who was obviously not at the apartment, while she attended a funeral that began at 10:00 AM.

When questioned about her brother’s whereabouts, Sanford said that he did not have a stable place to live but didn’t live with her. She also said she could not contact her brother because he didn’t have a working phone. Sanford said she had simply forgotten to ask her neighbor to check in on her son while she was out attending the funeral.

The officer explained how dangerous it was for Sanford’s young son to be left alone, especially with the large body of water located just feet from her back door. Sanford responded by saying that the toddler had been taught to stay away from the water, and that he had probably just followed the path that Sanford and her older child walked along each day. The officer reported that Sanford seemed unbothered about the incident and the fact that her brother was nowhere to be found.

DFCS was contacted, and a case manager arrived at the complex and told officers there had been one previous report of an unattended minor at the Sanford home. Based on all the evidence and the witness’s information, Sanford was arrested for cruelty to children in the 1st degree.

The DFCS worker made arrangements with some of Sanford’s family members to take custody of the children.

Sanford was transported to the Glynn County Detention center, where she was released to jail staff for further processing.

On October 6th 2022 at about 11:00 AM, I responded to a rear access gate to Glyndale Elementary school located behind the Eagle’s Point Apartments regarding a found child.

Upon arrival, I met with Glynn County School Resource officer Terry Grantham who had located a [REDACTED BY AGENCY] black male toddler wandering by himself. By the time I arrived on scene, Grantham had already obtained the residence the toddler lived at in Eagle’s Point. Grantham said he was able to query information from an older sibling who attends the school.

The toddler remained with a teacher on the school grounds as SRO Grantham and I proceeded to building [REDACTED BY AGENCY] The distance to [REDACTED BY AGENCY] from the back of the school property was at least 100 yards with traffic and water hazards present. I knocked several times with no response. The toddler had told Grantham that he was alone with a dog. I checked the door handle and found it to be unlocked. I opened the door and made several loud announcements in case someone was in distress or inside sleeping. There was no reply. A white and black pit/mix was observed inside the apartment. As the door was open, the extremely strong smell of marijuana emanated from the apartment.

A next door neighbor came out of [REDACTED BY AGENCY] and was identified as [WITNESS #1]. She advised she had just spoken with the resident who lives at [REDACTED BY AGENCY] The resident and mother was identified as Sanford Porsche. Porsche was supposed to be on the way back to the apartment. [WITNESS #1] said it was a regular occurrence to have her kids running around unsupervised. [WITNESS #1] said she is often asked to check in on the kids when Sanford is not home.

I spoke with Assistant Property Manager [WITNESS #2]. She stated she has observed Sanford’s children often playing and running around the complex unsupervised. [WITNESS #2] said she had previously documented at least one written warning issued against Sanford for allowing minors to be unsupervised on November 4th 2021. I was provided with a copy of the warning which was uploaded to Evidence.com

Sanford arrived on scene at 11:31 AM and stated she had gone to a funeral which started at 10:00 AM. She said she left her son [REDACTED BY AGENCY] in the residence with her brother, [REDACTED]. [REDACTED] was obviously not on scene. He did not have a stable place to live and did not live with her. He also did not have a working phone and only communicated with him via wifi. Sanford said she also forgot to call her neighbor, [WITNESS #1] and ask her to check on her son.

I explained the dangers her son could have gotten into, including the large body of water located feet from her back door. Sanford said her son has been taught to stay away from the water. Sanford also said her son most likely followed the same path to the school which she walks her older son along each day.

Sanford did not appear to be upset about the incident or upset her brother was not on scene and left her son alone.

DFCS was contacted and Case Manager [REDACTED] arrived on scene at 12:55 PM. [REDACTED] advised there had been at least one prior report made with DFCS of an unattended minor in the Sanford home.

Based on the totality of evidence and witness information, Sanford was placed under arrest for Cruelty to children 1st degree.

Case Manager [REDACTED] made arrangements with Sanford’s family members to take custody of the children.

Sanford was transported to the Glynn County Detention center where she was released to jail staff for further processing.