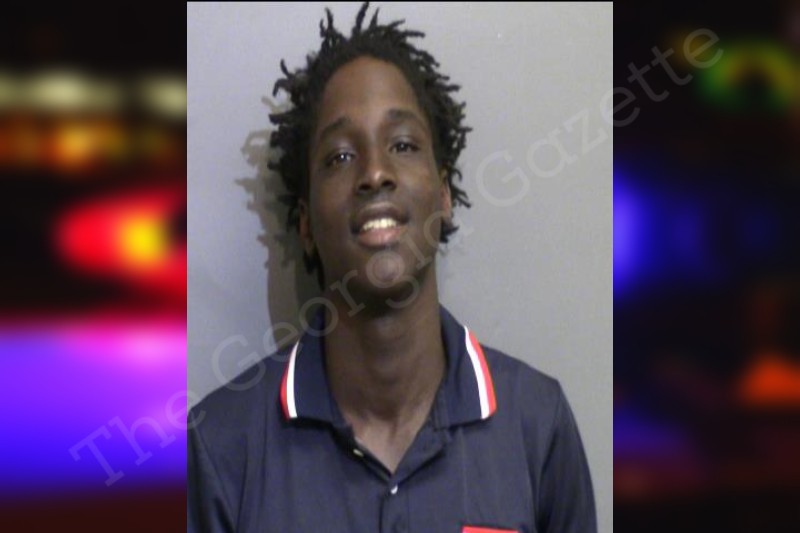 Mr [WITNESS #1] stated he did not know if anything was missing from the church and was unsure of how the subject entered the church. Mr [WITNESS #1] and I conducted a walk through of the church to check the doors when I noticed the side door to the sanctuary was opened. I observed a rock and broken glass on the floor.

Detective Edgy was notified and arrived on scene. Mr [WITNESS #2] would provide video footage and the estimated cost for the damages on a later date.

Mr [WITNESS #1] was provided with a case number and information on how to obtain this report.

I was informed that all doors to the building had been shut and when they arrived this morning all doors inside of the church had been opened where numerous rooms had items moved around.

Video footage was not able to be obtained but instead I received a screenshot of the videos where it shows a black male walking through the church wearing a tie-die hoodie with light colored pants with a bright colored stripe going down each leg.

I informed the complainant that if they found out that anything was missing to contact me with the number provided on my business card so that I could update the report. I have not received any information at this time of any items that were taken.

On the above date I spoke with the complainant, Mr. [WITNESS #1], in reference to security camera footage. It was learned that during their software update of the security camera system all saved video had been deleted in the process.

While conducting this follow up I was advised that numerous tools were used to break into locked areas of the church. The only item that could be collected for further processing was a fire extinguisher. That item was collected and will be placed into evidence until it could be processed for latent fingerprints.

I observed a busted lock on top of this metal box with the fire extinguisher next to it. I was told that the fire extinguisher was found outside of the closet and on its side on the morning when it was learned that a burglary had occurred. I was informed that only one person had touched this item and it was to place it back into the closet.

One (1) Brunswick Police Department Property Receipt #22-12964, created and submitted by Detective P. Edgy #455 in reference to the submission of a “1 EXTINGUISHER, RED in color.”

Detective Edgy requested I process this item for possible latent prints in hopes it may help identify the person or persons responsible for the unlawful entry into the First Methodist Church.

At 1045 hrs., I placed the extinguisher inside a 10 gallon aquarium (fuming tank) and used a Sirchie “The Finder” cyanoacrylate ester fuming pack to fume for latent prints.

At 1600 hrs, I removed the extinguisher from the tank and dusted it with black fingerprint powder. I was able to make five (5) lifts, of which three (3) were of the same partial latent print. (See lift cards for more info)

There was a partial fingerprint with friction ridge detail at a delta area. I entered and searched this partial print in AFIS.

After a very short period of time I received a job search response from AFIS of ten (10) possible candidates. The person ranked #1 was a Marcavious Danenatha Stanley, FBI #R1JKTE5K0. The finger was his #1 or right thumb. Manual, side by side comparison was done which led to an individualization being made.

I checked BPD’s records of anyone with that name and saw where there was contact with that subject. In fact, his name was listed as a suspect in another recent burglary, one that happened on October 27, 2022 at the Sonic Restaurant on Altama Avenue. Detective P. Edgy worked that case so I called him to let him know my findings in this case.

On 10/26/2022 around the hours of 0200 AM a black male wearing the same clothing as the male described and seen through screenshots of security camera footage from 1400 Norwich Street, First Methodist Church, enters Sonic. Once the male enters Sonic the male then steals money from that business and leaves.

That male was identified as Marcavious Stanley by Ms. [WITNESS #3], Manager, due to Ms. [WITNESS #3] seeing Mr. Stanley wearing the same clothes on a consistent basis as the male that entered Sonic during closed business hours on 10/26/2022 around 0200 AM.

Due to the male being identified by Ms. [WITNESS #3] and Ms. [WITNESS #4] as Marcavious Stanley as the male that committed the burglary at Sonic as well as a fingerprint being located and lifted from a fire extinguisher that was not in plain view of the public from First Methodist coming back as belonging to Mr. Stanley I will be applying for a warrant for Burglary 2nd Degree in both cases.

The burglary committed at Sonic on 10/26/2022 will be linked to this case number.

On 11-24-2022 at 1538 hours, while conducting a direct patrol in the area of Gordon St/Johnson St. I observed a black male who fit the description of a wanted subject out of BPD.

I requested for Pfc Herrera, Cpl Woods, Ofc Kinchen to respond in the area to assist.

Pfc Herrera made contact with wanted subjected Marcavious Stanley in reference to case number 22BP24782 with a warrant number 221117030.

Pfc Herrera advised Mr Stanley he was being placed under arrest for Burglary in the second degree (2). Ofc Kinchen placed Mr Stanley in handcuffs and searched his person. Mr Stanley had (1) white pill with 512 on it, which was identified as Acetaminophen and Oxycodone Hydrochloride. He also had a small amount of marijuana and another pill that was not identified.

Ofc Kinchen destroyed the items in front of Cpl Woods. Mr Stanley was placed in the back seat of my patrol vehicle, which was searched before and after. He was transported to GCDC and released to their staff.

Mr Stanley was served warrant 221117030. A copy of this report will sent to operator to remove him from GCIC/NCIC.