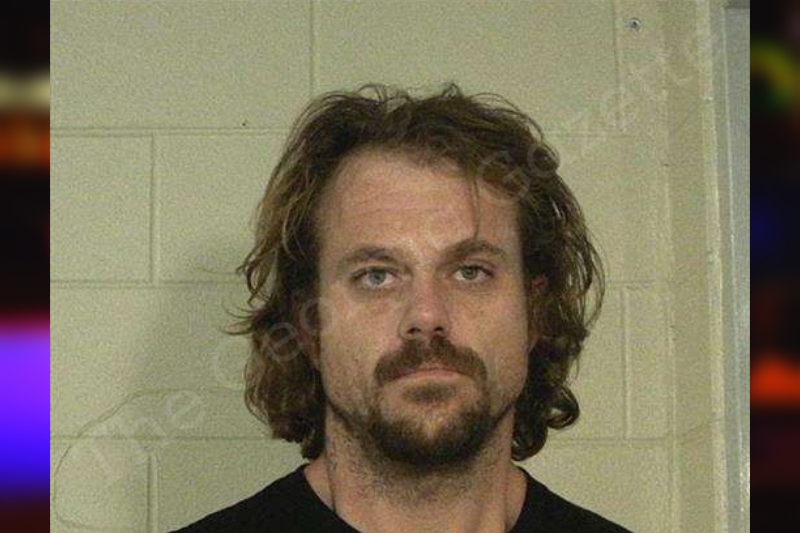 On Wednesday, September 28, 2022, at approximately 1445 hours, I was parked stationary in my marked patrol car on the westbound shoulder of Hwy 196 W.

I observed a tan Chevrolet Silverado exit the parking lot of Shuman’s Stop & Shop (5240 Hwy 196 W). The vehicle failed to yield entering the roadway while exiting the parking lot, causing a silver sedan traveling west on Hwy 196 W to apply its brakes to avoid colliding with the Chevrolet Silverado. I observed the truck go straight across Hwy 196 W onto Wells Road. The truck appeared to be accelerating in a fast manner as if the driver was trying to create separation between him and me. I proceeded after the vehicle and caught up to the vehicle on Wells Road at Wells Cemetery Road.

I conducted a traffic stop on the vehicle using my emergency lights and sirens. The Silverado had a Georgia license plate display of [REDACTED]. The truck came to a stop in the driveway of [400 BLOCK] Wells Cemetery Road.

I conducted a driver-side approach to the vehicle. As I reached the driver-side rear door, I observed it to be occupied by two males and one female. I identified myself and advised the driver of the reason for the traffic stop. The driver stated he was unaware he had to yield or stop while exiting the parking lot and entering a roadway.

I requested the driver to display his driver’s license, but he was unable to do so. He stated he left his wallet at home. I requested the driver to provide his name and date of birth. He provided the name Robert Lee and the date of birth of [REDACTED]. As I was talking to Mr. Lee, I observed that he appeared nervous and restless. His eyes were red, and the left side of his mouth had distinct tremors. I identified the female in the passenger rear seat to be Ms. Smith from a previous encounter. I was aware that Ms. Smith had warrants for her arrest through Liberty County Sheriff’s Office for a probation violation for an original charge of possession of amphetamines.

I instructed Mr. Lee out of the vehicle and to the front of my patrol car. I requested an additional unit to assist, and Cpl Chapman and Deputy Michalowicz arrived on the scene. Deputy Michalowicz deployed his department-issued narcotics detection k-9 Oso on the vehicle’s exterior for a free air sniff for the odor of narcotics.

Deputy Michalowicz advised his K-9 provided a positive alert for the odor of narcotics. I advised Cpl. Chapman that Ms. Smith had a warrant for her arrest. Cpl Chapman had both occupants exit the vehicle. The front seat passenger was identified as Mr. [REDACTED] by his Georgia identification Card. Sgt Abbgy arrived on the scene at this time. Cpl. Chapman and Deputy Michalowicz conducted a probable cause hand search of the vehicle, and no contraband was found.

I requested dispatch to confirm Ms. Smith’s warrant. I provided them with her Georgia Identification card and number, and they advised the warrant was valid and the jail wanted to place a hold on her. Sgt. Abbgy placed her under arrest in Double locked handcuffs, which were checked for fit. He escorted her to the rear passenger side of his patrol car, and she was placed in the back seat. Sgt. Abbgy searched his rear seat after the last transport with no contraband.

At the front of my patrol car, I asked Mr. Lee if he had consumed any prescription medication or illegal narcotics, and he stated no. I explained to Mr. Lee that based on his characteristics. I believed he was under the influence of a central nervous system stimulant. I asked Mr. Lee when was the last time he used Methamphetamine, and he stated he ate Methamphetamine three days ago. I then explained to Mr. Lee due to my training, knowledge, and experience, I believed he had consumed Methamphetamine within the last twelve hours.

I asked Mr. Lee if he would participate in a series of Standardized Field Sobriety Evaluations to ensure he was safe to operate a motor vehicle, and he stated “yes.”

Field Sobriety Tests:
This evaluation was performed on the shoulder of Wells Cemetery Road. The evaluation surface was straight and level on the blacktop, and no surface defects were noted or claimed.

Horizontal Gaze Nystagmus (explained):
I observed a lack of smooth pursuit. I observed a total of two out of six clues. Mr. Lee did not display vertical Nystagmus, and he was swaying significantly from left to right and front to rear.

I conducted the Lack of Convergence evaluations. I explained the evaluation to Mr. Lee, and he stated he understood. I held my stimulus, (my finger) approximately 12 inches from his eyes. Mr. Lee was then asked if she could see the stimulus, and he gave a verbal “yes.” I explained that I wanted him to follow the stimulus with his eyes and his eyes only without moving his head. Mr. Lee’s eyes did not converge on the stimulus during the first pass but did on the second pass.

I then conducted the Modified Romberg evaluation. I explained to Mr. Lee I wanted him to put his feet together, tilt his head back, and estimate the passing of 30 seconds in his head. Once he believed 30 seconds had passed, he was told to tell me to stop. Mr. Lee stated he understood the instructions. Mr. Lee told me to stop timing at 35 seconds. I also observed severe eyelid twitching, front to rear sway, and body tremors.

Based on my observations and the admission of illegal narcotics consumption prior to driving, I placed Mr. Lee under arrest in double-locked handcuffs, which were checked for fit. I searched him incident to arrest, and no contraband was found. I escorted him to my patrol vehicle’s rear passenger’s side, and he was placed in the back seat. The rear seat of my patrol vehicle was searched prior to the beginning of my shift, with no contraband found. I read Mr. Lee the Georgia Implied Consent Notice for Suspects Age 21 or over from my green implied consent card on scene. Mr. Lee provided a verbal “no” to the state-administered test of his blood.

At Mr. Lee’s request, the vehicle was secured and left on Mr. [REDACTED]’s private property.

I transported Mr. Lee to the Liberty County jail, and he was turned over to jail staff without incident. The rear seat of my patrol vehicle was searched prior to leaving the jail, with no contraband found. Mr. Lee received two citations, driving under the influence of drugs and failure to yield entering the roadway.