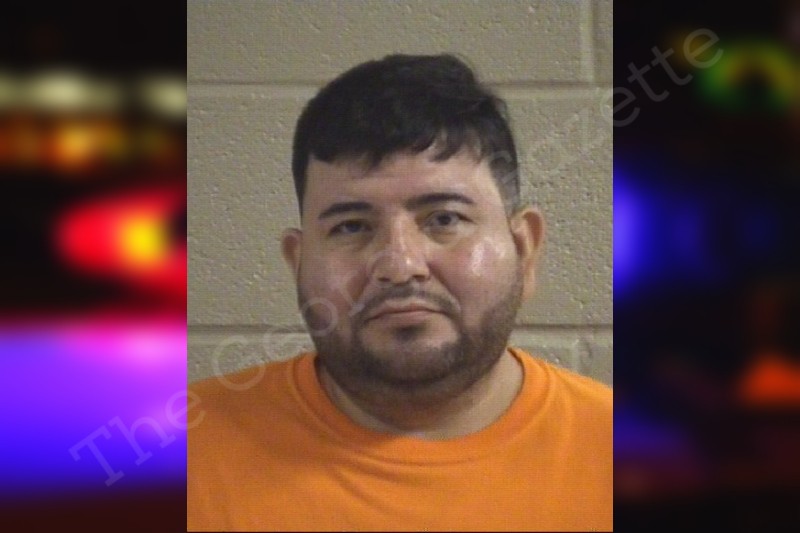 Criminal Trespass Of Property Without Permission

On 10/10/2022 Officer M. Dykes and I Officer S. Herrera were dispatched to 285 Kraft Drive (Tarkett) in reference to a disturbance in progress.

Prior to arriving on scene 911 dispatch advised that the complainant notified them that one of their temp employees was intoxicated on the premises and refused to leave. They advised that the temp employee was named Freddy Garcia Perez, and he was wearing an orange shirt, and black sweat pants.

I was the first patrol officer to arrive on scene. I drove to the employee parking lot of Tarkett where I observed a Hispanic male wearing an orange shirt and black sweat pants (later identified as Freddy Garcia Perez). Freddy looked directly at my marked patrol car and ran towards the second row of parked cars. I exited my patrol car and yelled at Freddy to stop running while I chased after him on foot. I yelled at Freddy to stop running several times and he refused to stop.

I caught up to Freddy while he stopped to enter a vehicle at the end of row 2. I drew my tazer and advised him to stop or I was going to taze him. At that time I observed that Freddy had a large pair of scissors in his hands while he said “ok let’s go” Freddy charged towards me by taking several steps in my direction. I immediately took several steps backwards while holstering my tazer and drawing my department issued pistol. I yelled at Freddy to drop the scissors and he refused to do so. Freddy made the statement that I was going to have to kill him. I yelled at Freddy that I would kill him if he made any effort to try and stab me with the scissors. I continued to point my pistol at him.

I give Freddy commands to lay down on the ground and place his hands behind his back. Officer Dykes placed Freddy in hand cuffs while I continued to have lethal cover on him since I did now know if he had any other weapon on his person. Once Freddy was in handcuffs he refused to enter Officer Dykes patrol car. Freddy wedged his legs into the corner of the back seat and laid on his back to prevent us from being able to secure him in the patrol car. After a brief struggle he was secured in the back of Officer Dykes patrol car and transported to the Whitfield County Jail.

I spoke with the complainant [WITNESS #1] (supervisor). [WITNESS #1] advised that on this day Freddy took a break and walked outside to his vehicle. He stated that when Freddy returned to work he observed that Freddy was extremely intoxicated on an unknown substance. He advised Freddy to leave and Freddy became hostile towards him and refused to leave. [WITNESS #1] stated that he told Freddy to leave several times and that they were going to terminate his employment. He stated that prior to law enforcement arriving on scene Freddy walked out of the building and they locked the doors behind him to prevent him from walking back inside.

On this day I charged Freddy on warrantless arrest number 66560 for the following charges: OCGA 16-5-21C aggravated assault, OCGA 16-10-24 obstructing or hindering law enforcement, OCGA 16-7-21 criminal trespass. He was turned over to the Whitfield County booking staff. The scissors used in the commission of the crimes will be entered into evidence at the police service station.